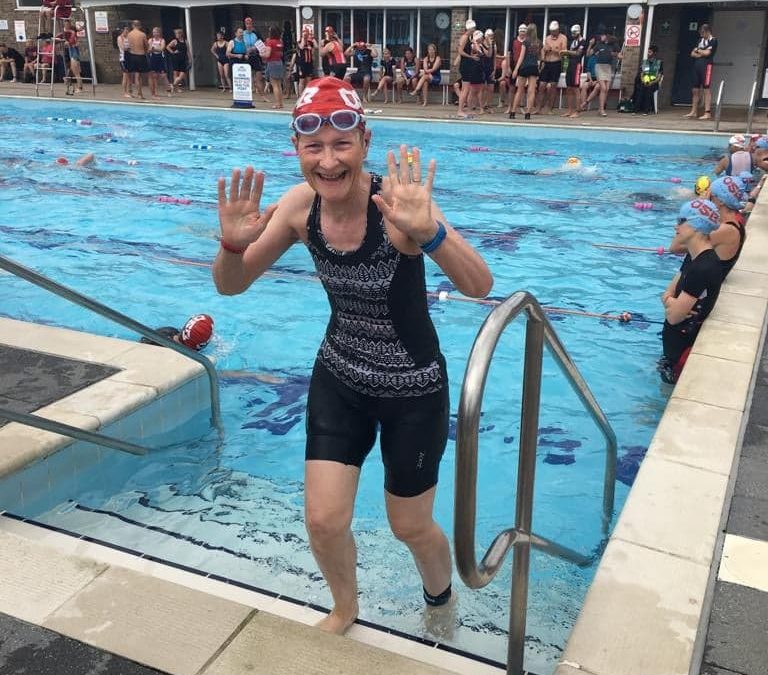 This past weekend we had a lot of Race Hubbers out in force at Woodhall Spa triathlon. We had great success with Carl Shaw taking the overall win, but its also nice to hear from the ‘normal’ athletes. Pauline kindly stepped forward to tell the tail of her race and share some insights from the fantastic ladies from Wednesday Wattbike.

I took up Triathlon as a retirement hobby, having started open water swimming just a few years earlier.  Woodhall Spa was my 7th sprint event, but was extra special as so many of my friends and my husband were also participating, several for the first time. Woodhall Spa is a brilliant event in that is extremely well organised with lots of happy marshals, a fabulous warm lido swim, and a flat cycle and run course on which it is very difficult to get lost.

The day before was hot, very hot and as well as hoping for cooler weather, I had in mind my usual aims: to finish without injury or embarrassment, and to enjoy myself. Tom Vickery had added in two further aims for me: take lots of photos and go out hard on the bike. Actually, he had a third relating to overall time but I won’t elaborate on that!

The morning of the race was indeed cooler, and my husband Julian was off early. Having watched his swim, it was photo time for the Wednesday wattbike ladies and then I started.  Towards the end of my first length I caught up with the swimmer in front, who didn’t let me past on the turn.  I slowed down, inhaled some water, upset the length counter on my poolmate but she got out after one more length and then I settled into my own comfortable speed for the rest. T1 was uneventful, it’s so easy when your hands aren’t numb with cold!  I got both feet clipped in quickly, this was my first race using cleats, they have taken some getting used to, and several tumbles!  After the first turning, I saw about 6 cyclists spread out ahead going just a little bit slower than I thought I wanted to, so with Tom’s words in my head, I went for it and overtook the lot. What a great feeling!  Then I just had to continue at this pace and try to beat last year’s time. It was so windy I thought I might get blown sideways after one particular corner, but I stayed upright, unclipping as necessary without incident, phew!  I finished a minute faster than last year.  T2 came and went and I had remembered Claire S-S’s advice not to chat with any lovely young men whilst racking my bike, and got straight out to run.  This was the hardest part for me, I’m a fairly slow runner but I was chuffed to be overtaken by both Lisa and Diane who went steaming past me.  It was not my fastest run but I did it, mindful of just how lucky I am to still be healthy enough to be able to do it, with a big smile for the finish line photo. One year older and only 30 s slower overall, I’ll take that.

Then time to cheer Liz, with whom I’ve done 4 of my previous events, then Sally and Donna who were both first-timers.  All amazing ladies.  Everyone loved it. The atmosphere was brilliant, and most of us managed to meet up again at the end for more photo fun and laughs, as well as food!  It was great to see other Racehubbers out there too, Eleanor and Daniel, and also Carl the overall winner, so very well done!

Performance of the day though has to be Sally who won 2nd in AG at her first event after buying her first ever bike 2 years ago. She too confessed to hearing Tom’s voice in her head on the bike course. And quote of the day has to be “I actually think I want to marry Tom Vickery.”  I’ll let you guess who said that!

Big heartfelt thanks and congratulations to everyone who participated with me and also those who supported. You made it a fabulous day, another one I hope we’ll never forget.

Finally, thank you Tom, despite nearly killing me every Wednesday at Racehub, you are a real star and inspiration to us all.