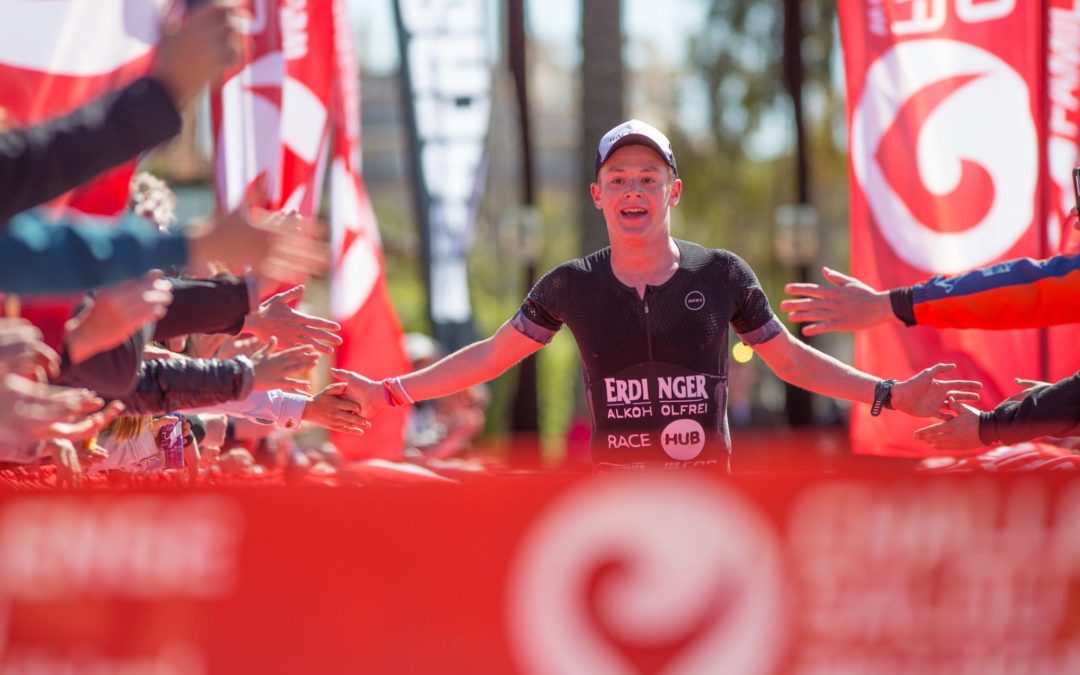 Race Hub’s very own Tom Davis brought home the bacon & kicked off 2019 with a bang. 3rd Place at Challenge Salou. He certainly had the Giant Trinity flying with a 2:08 bike split. This looks like a really exciting year for Tom who has stepped up a level and we expect to see him near the front of some big races this year.

Challenge Salou! Well, what a race! 3rd place! An awesome weekend, and a result I‘m really happy with to start the season.

Going into Salou, i knew it was going to be a tough race, with a strong field assembling,to kick off the European race season, so i didnt really have any expectations. I knew i would like a podium but realised that it would be a tough task with a number of big names on the startlist.

The race itself didnt start all that well with a dissapointing swim on my part. I just couldn‘t seem to find my rythm, not helped by the very challenging sea conditions. After bumbling round in the sea for what felt like hours, i finally emerged from the sea, surfing the waves onto the beach, and found that actually it hadnt been as bad a I thought it may have been, coming into T1 just hanging on the back of the front group.

Coming from an ITU background, I tend to find that I make ground up through transition, as I‘m used to the speed and pressure of that being a key part of the race, and once again that was the case, helped in no smallpart due to my awesome Zone 3 Vanquish wetsuit, slipping off in a matter of seconds.

Onto the bike, and for the first 20 minutes I pushed hard, to make it through the rest of the group, and from there the rest of the ride was uneventful. I sat on the front of the pack for the majority of the bike, well aware that the boys behind were getting a nice tow, but i decided that i’d rather ride an honest bike leg and see how i could run off, than sit in the pack, and leave it up to the others. Also at the end of the day I’ve put a lot of work in over winter on the bike, and i hadn’t been doing that just to be part of a run race.

At about 50K, Antony Costes came past, and i decided that i was going to have to let him go, as he was riding too hard for what I knew i could hold. The Eventual winner, Pieter Heemeryck also went with him, but I had confidence that if I rode to what I knew, that was my best opportunity. The course was fast and smooth, but there was a bit of a lump on each lap and due to a course change in the days before the race, by the 6th time up and over it certainly stung the legs.

So coming off the bike, I was pleased to see that I had managed to drop the large majority of the guys who had been sitting on the train during the ride, and  entered T2 in 3rd with the two about a minute up the road, and two riders for company – home favourite, Pablo Dapena, and an Italian, Mattia Ceccarelli.

I knew that Dapena’s run was his main strength, so coming out of T2, I settled into my own pace and let the other guys go up the road. Ceccarelli came back to me at about 2.5k, so I was then running in 4th. The course in Salou is an out and back 5km loop, and as such I could see the guys running ahead of me, and also the gap I had back to other athletes. There was also great support on the course, keeping me up to date with time gaps, and at about 7k I ran through Costas and found my way in 3rd.

As i mentioned at the start, I’d really wanted to get onto the podium, so to find myself running in a podium spot was a great boost. From there, i knew it was my race to lose, as i had about a 60 second gap to 4th. However coming into the last 5k, the gap had closed to around 20 seconds, but i just focused on holding the form, knowing that as I was running around 3:25k pace, he was going to have to be running about 5 seconds a k quicker which at that point into the race would have been good going. 2.5k to go and I saw that I had opened the gap slightly, which gave me confidence, and finally at the start of the finishing chute I was massively relieved to see I had enough time to enjoy the final run to the line, give some high 5’s and finally relax.

Yes I’m obviously pleased with the result at the time, but actually looking back on the event, I’m even more chuffed. I had a strong result, despite my swim not going as planned but actually i was happier that my bike had became a weapon that can change the race, rather than just maintaining my position, which had been the case last year. A massive thanks to Chris Hine helping me with that throught the winter.

I can’t wait to see what else is on the horizon this season. Im very excited to put what has been a long winter to good use, and see what emerges out of this season. Next up for me is Challenge Gran Canaria on the 27th of April, so its head down till then!