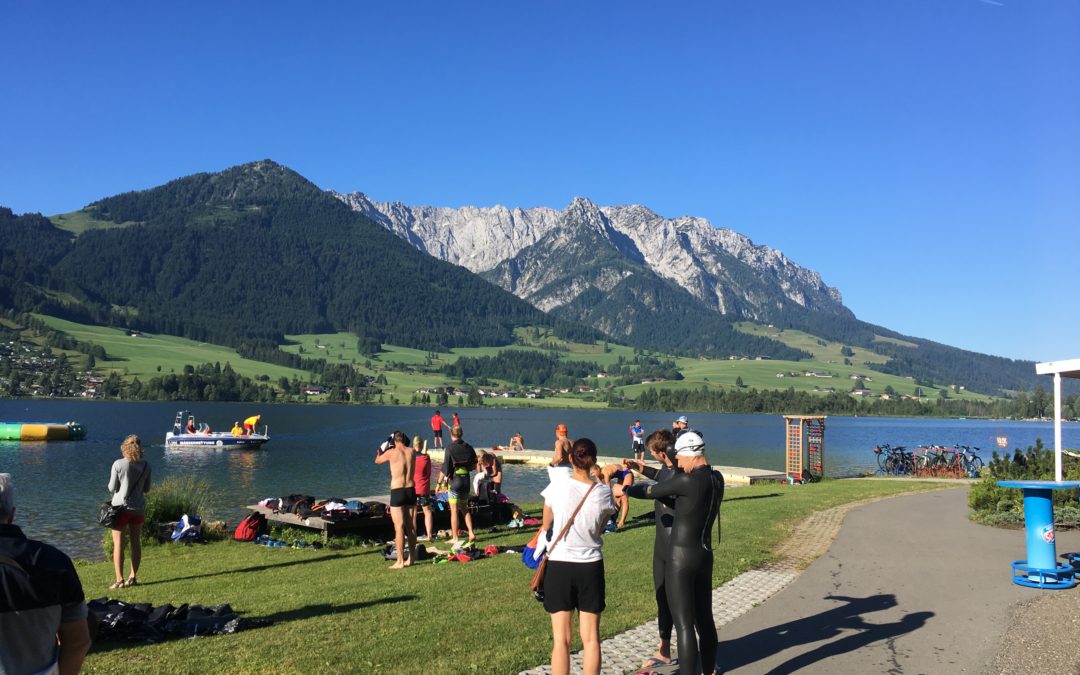 A race that I came to in 2018 and I was excited to return, as it’s such a stunning race, and one that I didn’t feel I did justice last year.

The days leading up to the race were less than standard, with temperatures up around mid 30’s, training was limited to early in the morning or in the evenings, despite that I was feeling good, and excited to see what i had come race day, especially after the  Kaiserschmarrn party pre race.

So race morning. I knew it was going to be hot with the race starting at 1030, and in the days previous had prepared the best I could, making sure I was well hydrated with electrolytes, and minimising the time spent in the sun. Sometimes I think it’s easy to get caught up in being away, and wanting to explore, but I knew that with the heat I needed to be in the sun as little as possible, as much as it pained me to sit in my hotel looking at the glorious weather out the window!

Anyway the race came round all too soon, and it was time to warm up. I ran a lot earlier than I would normally in my pre race warm up, to try to give my muscles a chance to warm up, but to also give my core a chance to cool before the race, as I knew that was going to be key. 30 mins to go and I went for a swim warm up, more as much to keep cool than anything, but all was feeling good and powerful.

Lining up on the side of the lake, I knew it was going to be a fast swim with ex Olympic swimmer Lucas Kocar in the field – that’s the feet I need to follow!!

Gun goes, and I charged into the water, slipped on a stone and flopped into the water! (There goes my career in diving…) next task, find the feet! Fairly easy, he’d gone out like a rocket!! Luckily I was on the edge of the pack, so I managed to go slightly wider and put in a big acceleration and find his feet. Unfortunately he took me on a bit of a wide line and came round the first buoy on the feet of a couple of other guys. To be fair , I think we may have been better with binoculars than goggles sighting it!

From there we settled in, and I exited the water fairly comfortable in 2nd place.
A quick T1 and I was out of transition with a strong group of Maurice Clavel, Frederic Func and Nils Fromhold. Ignoring my power I just rode, as I knew that was the group to get in. About 10k in, going up the first climb, I realised I’d forgotten to pack my legs.

They felt like they were made of pipe cleaners, bending and wobbling anytime I tried to push any power. 5k further along and I had to let the group go, I just didn’t have it today. Luckily 5k further down the road the second group had made it up to me (or I’d dropped back…) and there I rode till the end, struggling up the climbs and making the rest of the ride as easy as possible.

I came into t2 and guessed it was probably going to be a long run, in what was 38 degrees. I’m never great in the heat, but it’s something I’ve been working on, so now was a good test. First 5k and I set out steady, as I knew it would be easy to blow myself to pieces, and actually I felt ok. Going out onto the second lap, I knew I was starting to struggle. I was loosing power, and running more and more like Mr Bean. Through 8k I knew I was in trouble. I was struggling to run in a straight line and put one foot in front of another. I stopped at the aid station and covered myself in water. That helped for around a KM , but it was getting worse and worse. I knew at that point my day was done. I had 12km to go, and i knew I could cause serious damage by carrying on. I had to pull the plug. DNF…

I hate that. I pride myself on always seeing it out to the end, whether it be good or bad, first place or last place (yep I have come stone dead last before after walking the 10km in my first ever European cup!!)m but I’ve been abusing my body a lot over the last few weeks, and I think it had nothing left to give. At the end of the day, I had to consider my health first. I’ve got lots of big goals coming up, and if I had carried on yesterday, I very much doubt I would have made the line, and I could have put myself in all sorts of trouble, potentially writing off the rest of the season. As much as it stings, I know it was the right call. Does that make it easier? Absolutely not.

What it does show me is I still need to learn a lot over this distance, and especially in the heat. I’ll sit down and draw everything out of it i can, and next time I’ll come back stronger.

I just want to say, despite my disappointment, Challenge Kaiserchinkl Walchsee, is a hell of a race. Simply stunning. I’ll be bak next year to put things right, you can be sure of that!!