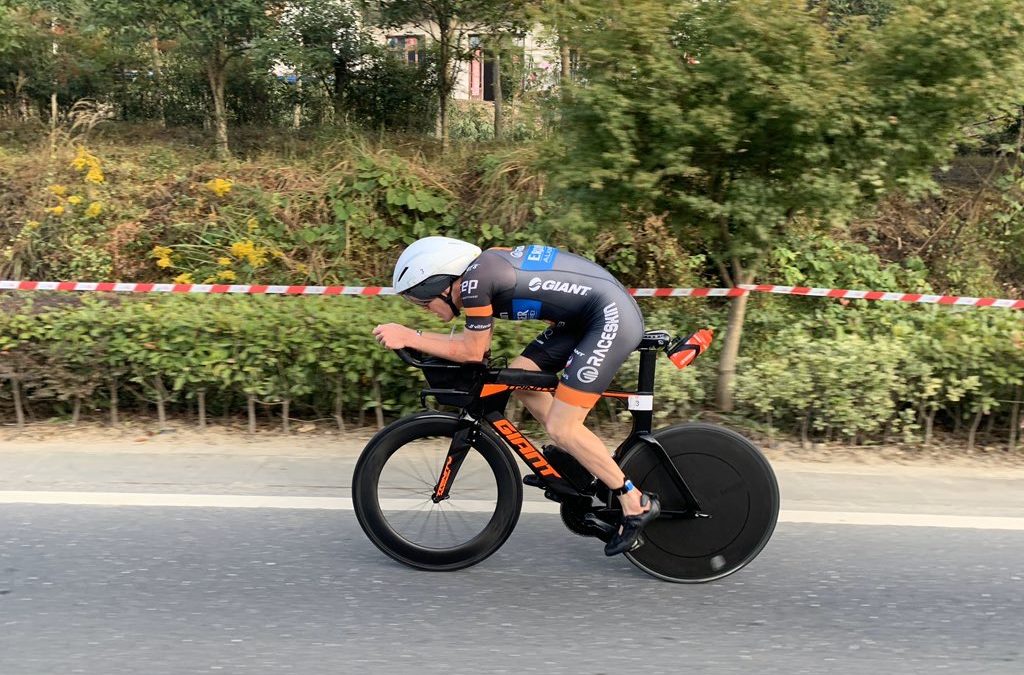 Challenge Anhui, what an event. From the moment I agreed to do this race, it was a step into the unknown.
– My first Full distance,
– My first time in ChinA
– my first run ever over 26km
– My first ride ever over 170km…

I’d gone into this with very little expectations, and my only goal to reach the finish line, no matter what it took.

Race morning came around. I knew I was in for a long day, but I was weirdly relaxed about the whole thing. It’s nice knowing that a small mistake isn’t going to cost the race like it can at ITU, as there’s plenty of time to make it back up.

Onto the swim, and I decided I wanted to split it up, and try to make the race as individual for everyone as possible. 100 or so strokes fairly hard, and then I settled it down to a more relaxed pace. Looking behind I was on my own, so from there it was a case of setting my own tempo to reach the end of the swim without burning any matches.
I emerged in a shave over 43 mins. (Let’s go with it… I suspect it was about 200m short) and with a gap of around 2;45
T1, just keep it relaxed, and then it was out onto the bike.
I knew I needed a steady start. It was a long day, However with the amount of spectators it was easy to get carried away. The course was 4 loops, the first being 55km fairly hilly then 3 loops of 42k, still with a fair bit of undulation.
Finishing the first loop, I looked down and saw a normalised power of 294w. Bit strong!! From there on, I tried to ease it back slightly, and ended with a normalised power for the whole ride of 269w, and a time of 4hr30 and 12 secs, with 1300m elevation gain (and the fastest bike split). The whole ride I was just focusing on getting in the nutrition, and keeping it relaxed. I had a couple of rough patches, but I was expecting it, and just rode them out the best I could. when you are out there for 8+ hrs it’s to be expected!

Another smooth transition and it was out onto the run with a gap around 6 mins to second. Surprisingly I was feeling really good. Clipping  of the first 10k in around 3:55k pace I settled in nicely. Out onto the second lap, and I was still holding 4 min ks but I knew the boys behind we’re running well. I got to 20k and then the wheels started to come loose. Steve and Levi caught me just after 20k. The next 5k, the pace dropped to around 4:20s. From there on in, it was a case of getting to the line. The lack of specific prep showed I think on those last 15k. There was a good fair amount of walking, and plenty of self doubt, especially as I headed out for the last 12k. I knew it was still a long way to get round! I knew I had about 10 mins at least on 4th so I just focused on keeping moving. I was walking aid stations, shovelling in as much coke and sugar as I could. With 5k to go, I decided it was all or nothing, from there I ran into the finish at around 4:15ks. The fact I was able to pull if back for those last 5k was something I was really proud of, as mentally I was in a bad way before that.
With 1.5k to go, it was up over the stairs (and back down the other side….) and then all of a sudden Around 400m ahead I could see Steve (McKenna). I just gave all I had to try and catch, however he just made it to the line ahead.

3rd place. Pleased? Yes I’d say so. Position wasn’t the big goal. I’d come out with non existent specific prep, and I was proud of the way I raced. I can’t say what if. I put myself in a position to go for the win, and was beaten by the better guys on the day.

I just want to say a massive thanks to the organisers, and everyone involved with this inaugural race. It was mega! From visiting the local master bamboo craftsman, to the number of spectators, it was one of  the best events I’ve done! we’ve been treaded like rockstars!
Oh, by the way, don’t come out here if you’re camera shy! The amount of photos, selfies and autographs we’ve all had to do this week has been mad! Even just walking along the street in the run up the race, you had to leave an extra 10 mins to get anywhere, just because of the amount of people wanting a pic!

What’s next? Well there is one more race to come this year… you didn’t think I could have too long without a race! Keep an eye out for where I’m gonna be heading later this week.

All that’s left to say, is thanks for all the support, (and ive got some news on that front also coming…) and messages. I’ll try to get back to them all, but quite simply it’s been overwhelming this weekend, so thanks!