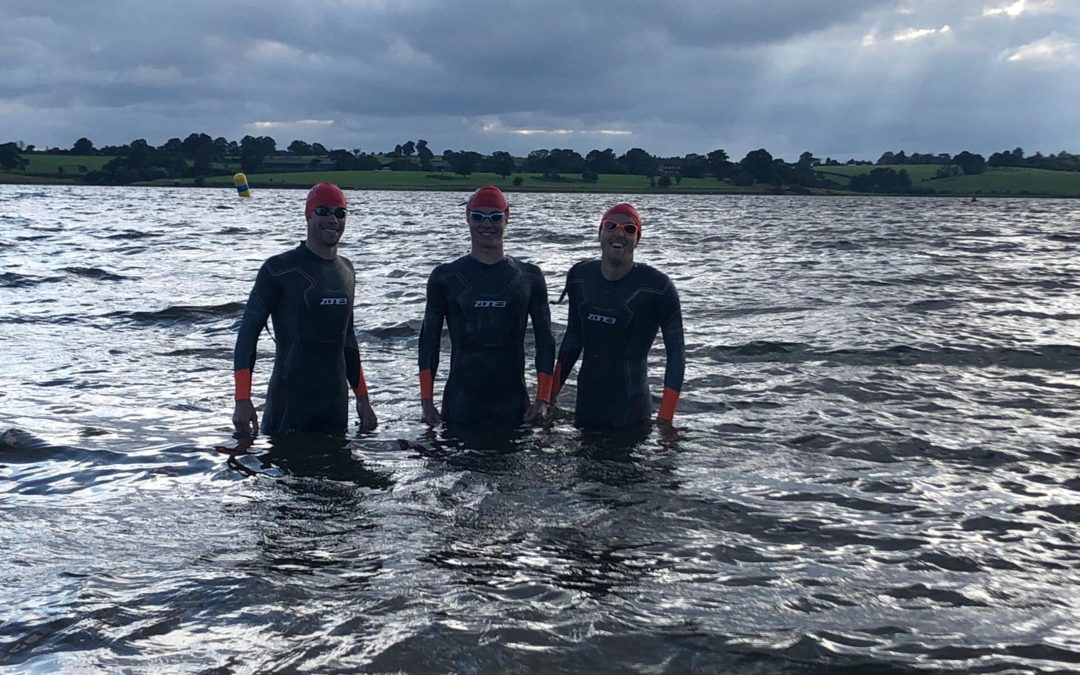 This is the first triathlon team event like this I’ve done. The race is a 3up time trial across all 3 discipline with teams setting off 2min apart. With this format you are only as strong as your weakest link. Which means if you are that weakest link, it’s going to hurt! I may have been that weak link. Paired with Pro Tom Davis who has been a rampaging force this year and Carl Shaw who still remains one of the top short course triathletes in the country and swims like he was born and raised in water. It was going to be on from the start.

Our main competition the Tri Camp TNF boys had some strong guys in there mix. But who could get there baggage to the end fastest?

The wind was up at the Blithfield sailing lake which created sea like conditions. Swim also turned out to be a touch longer than expected (Somewhere near 800m than the expected 500m). The waves made it harder to hold the feet but the pair of dolphins just about looked after me. They even had the composure to have a chat to each other whilst doing so. We came out the water in 10:53 gaining over a minute on the TFN / Tri Camp chaps.

This is where things got hard. I was in the red zone coming out the water whilst those two were comfortable and ready to put down the hammer, so when we jumped onto the bikes and they started laying down the heat and it just drove me deeper into the red sending me off the back. They let up and got me back on and It wasn’t until the long down hill that i was able to recover a little. Tom & Carl were taking all the turns into the wind and i was just using every ounce of my drafting skills to try and freshen up. Despite the struggles of me yo-yoing off the back a couple of times we had the fastest bike split and hit the run taking a few more seconds off the TFN boys.

I was hoping that my Rope’a’Dope strategy of taking a beating in the swim and bike would work and i could hand out some pain once we hit the run. Turns out that i never got off those ropes and just ended up taking more beatings. Tom Davis physically pushing me to keep me pinned in the red. We had the fastest time of the night and it was good ‘fun’ event which i can thouroughly recommend